There has been a bit of a fuss in the media recently about the House of Lords. This is a perennial discussion and this time it was triggered by a BBC documentary “Meet the Lords”, which apparently portrayed the upper chamber as a bunch of out of touch scroungers.

I say “apparently” because I have not watched it. I know many members of the Lords, and certainly that description does not hold true for the ones I know and I don’t much feel like watching something I know to be inaccurate. That may be because the Lords and Baronesses I’m most familiar with are part of the 400-odd working peers who regularly turn up.

Not that I begrudge Lords membership to the others because many will have done their time. Yes, they can retire under current rules. But there is little incentive to do so and retiring might upset the political balance that exists if one party’s members retire quicker than another’s.

But it is very clear that having over 800 members is unsustainable and reform is needed. And the latest discussion has gone back to the idea of a mandatory retirement age. 80 is the most common cited retirement age, although 75 is also sometimes quoted. I should state here that I am against this idea, not just because it is not enough (as we’ll see momentarily) but because age and the ability of someone to contribute to politics are not necessarily correlated. The data used for this post has been extracted from the UK Parliament Data Service who also provide details on attendance and speaking, so I might try to see what correlation exists between age and attendance in a subsequent blog post.

Back on topic, I was interested in how retirement at 75 or 80 would affect the size of the House of Lords. I had a hunt around for this but other than some fairly rudimentary estimates for the size of the house in 2022, I could find no other information on the topic so performed my own investigation.

We can have a pretty good guess at what the Lords will look like under current rules, because statistical data on life expectancy is available and calculating retirement is easy. What we cannot predict is how fast Prime Ministers will create new peers, but a very conservative estimate would be no less than 12 a year. (The averages for Heath and Brown) It’s hard to know how fast peers will retire voluntarily as the rules allowing this are new, but 18 retired last year so a restrained Prime Minister should just about be offset by voluntary retirements. 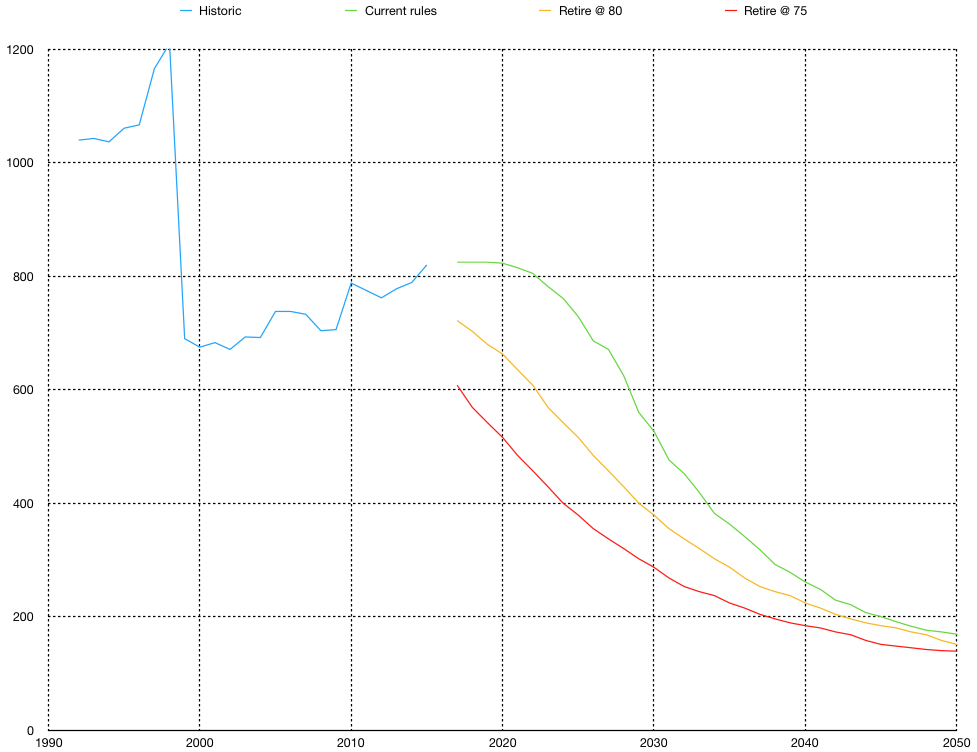 As we can see, even retiring peers at 80 doesn’t shrink the upper chamber quickly. The membership will drop below the current size of the Commons (650) in 2020, versus 2027 under current rules, but 400 is reckoned by many to be a more sensible size and even without new appointments that level isn’t reached until 2028, 11 years from now. (Versus 2033 under current rules) The more aggressive approach of retirement at 75 does immediately make the Lords smaller than the Commons, and 400 members is reached by 2023.

You may have noticed the long tail on the graph above. This is not because we have some immortal members of the House of Lords, even though it might feel like the opinions of some more senior members hark back to some distant and long-forgotten past. This is because even without new appointments by the Prime Minister, there remain just over 100 hereditary peers plus the Church of England bishops. Removing those posts and letting the same rules apply to those members as currently applies to life peerages does not really affect the overall outcome much. 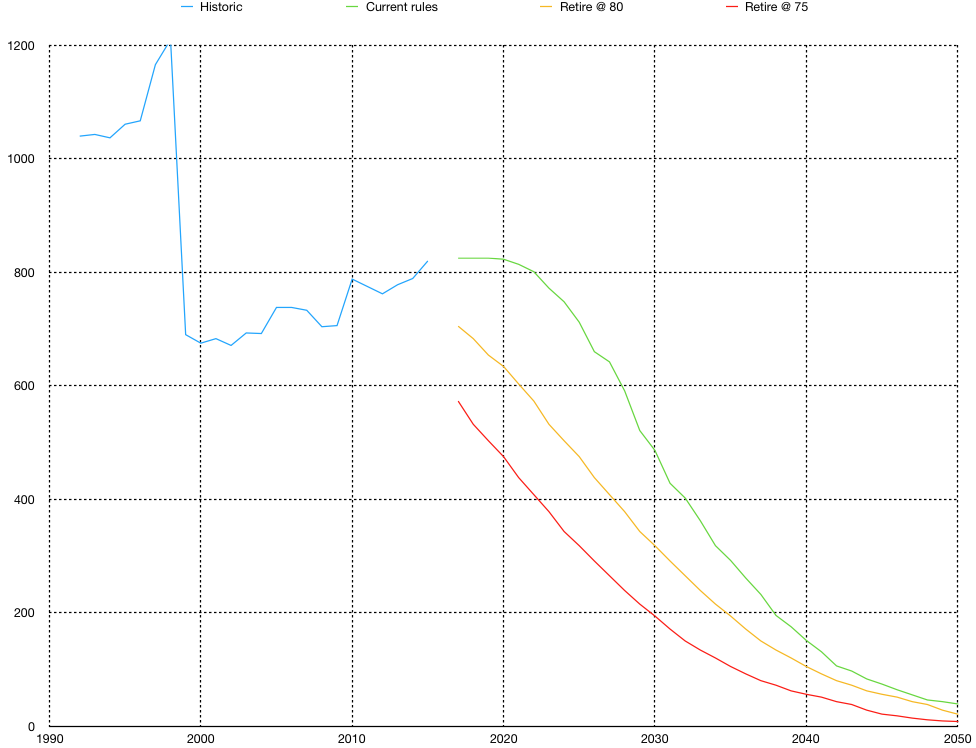 Whatever the solution to the House of Lords is, mandatory retirement age might be a step in the right direction, butoes not seem to be it. We’re back to needing more fundamental reform, such as an elected upper chamber.

And finally, if you wonder about how all this affects party balance: In every conceivable scenario of retirements, both with and without hereditary peerages and the bishops, the Conservatives remain the largest party in the Lords but they never quite achieve a majority whilst the bishops are present. However, scrapping hereditary peerages and Bishops woudl result in a Tory majority in the upper chamber some time between 2036 (Retirement at 75) and 2044. (Current rules)