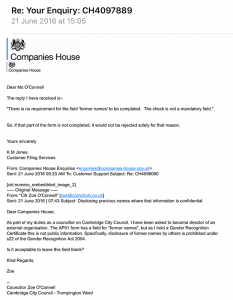 A topic that comes up frequently in Trans circles is the problem of “Dead” (I.e. pre-transition) names, something that many trans people are reluctant to make public for a whole variety of reasons. Unfortunately, many forms ask for this information with the assumption that most people who have changed names have only done so because they have married.

I ran into this problem myself just over a year ago, in the context of a charity I became trustee of as a result of my role as a councillor. Neither Companies House nor the Charities Commission actually require this information but that is not made clear, and when holding public office it is often necessary to dot the i’s and cross the t’s on paperwork to avoid unforeseen repercussions later on. I asked both organisations for confirmation, and I reproduce both their responses complete with reference number in the hope that it helps others in future.

Click the images for full size versions, and plain text versions of the respones from Charity Commission and Companies House are also available if anyone needs them.